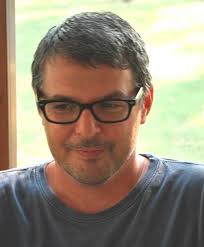 Scott Garson is the author of IS THAT YOU, JOHN WAYNE?—a collection of stories—and AMERICAN GYMNOPEDIES, a book of microfictions. His fiction has won awards from Playboy, The Mary Roberts Rinehart Foundation and Dzanc Books, and he has work in or coming from Kenyon Review, American Short Fiction, Hobart, Conjunctions, New York Tyrant and others. He edits the Pushcart-Prize-winning journal of very short fiction, Wigleaf.

What was your first real publication and how did it come about?

If I tell you that, how can I keep it buried?

My first publication was back in the ’90s—in the ‘Before’ era, as I see it now. Before the internet. Before indie mags had more than local reach. Then, as now, we were all sending our stuff to the Paris Review and receiving form slips in return. If we wanted a more realistic chance, we had to get creative. I looked through the addresses in the back of the Best American Short Stories and saw an Illinois journal (now defunct) called Black Dirt. They accepted and published a story of mine called “Aloha.” It was okay. My Mom liked it, I think.

You’ve just published your second book, Is That You, John Wayne?, another amazing collection of short stories. What makes you gravitate to short fiction? Do you ever plan to write longer-—say, a novel? 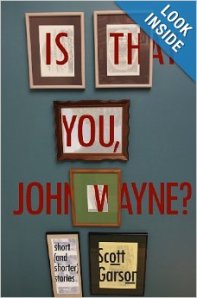 Well, I do! There are a couple of novel manuscripts in my past… Does that sound depressing? Novels are like short stories, I think: it takes a while to learn how to do it. But while apprentice short stories are easily enough forgotten, novels take longer. There’s such an investment. It’s like you’re not allowed to let them go.

As to the attraction of short fiction, that’s easy: I loved reading before I discovered short fiction, but I probably wouldn’t ever have thought to become a writer if it weren’t for reading short fiction. That’s to say, fiction seduced me via the short story. It’s where I first saw how sense, sentence and story could come together as a kind of magic. I wanted to do that, to make that kind of thing.

How long has Wigleaf existed?

We just had our sixth birthday. Birthday #5 was fun because my wife, Becky, made Wigleaf a birthday cake. A real birthday cake for a virtual magazine. My kids approved because the magazine, unlike them, could not bring a mouth to the party.

Again, this is a journal dedicated to short-short fiction. Why and how did you create it and what were you trying to do differently from other literary journals?

I suppose I was getting a little dejected as a writer when I got the idea for Wigleaf. That might be too strong a word, but my excitement was for sure not at a high. This was in 2007, I guess. I was publishing stories fairly regularly, which should have been spiriting, but there wasn’t a lot of response, and if I got a contributor’s copy and didn’t particulary enjoy some of the other fiction, I was liable to feel that the whole process was kind of useless.

Around this time I sent out a short-short for the first time, a 500-word story called “Lucky.” It was accepted by a journal that published only work of that length, Jennifer and Adam Pieroni’s late great Quick Fiction. Maybe you know where this is going. Reading that contributor’s copy of Quick Fiction was a great and amazing experience. All the writers were doing such careful, interesting work. With each piece, it seemed like the whole sense of what a story could be was invented all over again.

Not long after that I taught myself basic html. Online lit mags and short-short fiction were both sort of new, as I saw it. I thought they were a good fit for each other. (Some other early online mags had paved the way here: SmokeLong Quarterly, elimae, Hobart, Juked, and FRiGG, to name a few.)

What are you working on now?

Only a handful of people know this, so I guess it qualifies as a secret. Ready? I’m writing a novel for young readers which I’ll probably try to publish under a pseudonym. My two kids—ages 8 and 11—are responsible. They’ve challenged me to write something “not boring,” and my 8-year old has all sorts of advice for me as to how to do that (for example, “People like books that have chapters with titles.”). As a writing project, it’s certainly a switch-up. I’m enjoying it.

I have a draft of a short novel that I feel good about. Just now I can’t stand the idea of publishing it. A writer who’s got a book out is a writer whose mindlife is somewhat compromised…..  Maybe in another couple years.

Do you write every day?

In some seasons, yes. When I’m teaching, no. This semester, I write on Tuesdays, Thursdays, and weekends.

Maybe when my kids are grown I’ll be able to write every day again. (Not that I’m looking forward to that… This is a good time!)

#2.  Understand that for most readers, the pleasure of fiction is the pleasure of interiority. This is not saying too much, in the sense that there are so many different ways to take readers inside a life. But it’s a good thing to remember, all the same. Better that the mind of your fiction move from the inside out rather than vice versa.