I’m a writer. Like most writers, I’ve never actually written a book and I probably never will. I jokingly say I’m too ADHD to write an entire book … and that might actually be true. I think and write in bits and pieces … an article painting a piece of my day in vibrant swipes of color, or a blog entry detailing a bit of a harrowing experience in the harshest black and white.

As the mother of teenaged twin sons, I often write about parenting issues … the joys, the toys, the very smelly boys. For almost two years now I’ve been writing a parenting column for Boston area Patch sites.

You know what that means?

It means that I’ve produced a very tall stack of descriptively documented chapters in my children’s lives.

Why, some people might even call that a … book.

But I’m executively dysfunctional, which means I work best if someone else provides the structure. It’s why I have a day job in a professional environment that comes complete with detailed policies and procedures already outlined in neat little handbooks with convenient tables of contents; Microsoft Outlook Calendar already installed on my computer; and assistance with the administrative organization.

Write Despite provides that same structure for my writing. Twenty minutes a day is not overwhelming or overflowing. I can commit to that. I did commit to that, and it helps me consistently produce and honor deadlines.

Note From Write Despite: We’re so glad to have helped bring about some amazing writing, like this piece from Adrienne’s Moms Talk column, posted on Massachusetts area Patch sites. (Grab a tissue.)

Springtime, and I’ve been going through old papers here at my house, trying to decide what to toss and keep. One file drawer holds nothing but fiction—my stories, ideas for stories, friends’ stories, handouts of stories from past teachers…and one big, fat manila envelope marked Rejections.

Why did I keep them? Hey, in college, I knew someone who actually papered a wall with rejections, and I’ve taken the same sort of pride in mine. Most of them are standard form letters, but some editors wrote personal notes, and I have to give them credit for scribbling a few thoughts down for me. Especially the ones from high-brow pubs, like The New Yorker, The Atlantic, Harper’s, Esquire, and a whole slew of literary journals: Crescent Review, Story, Grand Street, Crazyhorse, Glimmer Train (I would still commit a misdemeanor to get into Glimmer Train). And then more obscure ones like Bottomfish, Common Touch, and Dodobobo (?). Yes, I spelled it right.

The editor of that last one sent me a very lengthy, handwritten rejection, which ended with, “Your story is too long. Do you have anything shorter?”

It took you nearly two pages to call me long-winded?

Another said, “We were very interested in your story and had hoped to use it—but found we couldn’t schedule it in a reasonable time.”

Schedule it? Hey, no rush. I would wait for, um, ever.

A third said my story was “Impressive. It came CLOSE. I especially liked the ending. I’m sure you will publish this story, as I nearly did.”

Okay, that one was just cruel.

My favorite was the one pictured here.

This is the original envelope I mailed a story in. Back in those days, I would send printed pages with enough return postage for the story’s return, along with any comments. And I would turn down the corners of a couple of pages in the middle, and near the end (oh, so tiny folds, as not to be noticed). That way, if the story came back, I could see if it the “seal” had been broken, and verify whether it had actually been read. (Anyone else do this?)

Anyway, there was apparently a team of editors at this particular journal, and they all read my story, then passed around my envelope and wrote their “votes” on it—each stating why it was good or bad. Some additional votes were written on scraps of paper that fluttered out when I pulled the pages from the envelope. Now that is a memorable rejection.

Only a few of my stories actually got published—one after getting rejected 63 times. My Rejections folder contains 117 letters—my Acceptance folder six. But I can’t allow myself to part with any of them, since they are evidence of the fact that I actually did do some writing, and spent a fair amount of time working to send that writing out into the world. When I look back some day, maybe I’ll at least be able to say I tried.

Most of my rejections these days are from agents. A few are standard form letters, and some actually give me the equivalent of what I’d guess a handwritten note would be these days—a personal apology and best of luck with some other agent (read: sucker) who might have lower standards.

But I’ll keep trying, keep writing, and no doubt keep getting rejected. It’s all part of the life we’ve chosen, right? And if I ever get my office clean, I may just start putting up that wallpaper.

If you use Word to write your documents, like most of the free world, Shift F5 is the best little trick ever.

I used to put symbol markers in my long writing projects. At the end of each session, I’d slip in an asterisk so I could search for it when I revisited the piece to find where I left off. But when I started to use asterisks to denote breaks in time, that got confusing. I finally settled on a percent sign, which I would never use in regular text and was easy to find. This worked great, except I’d forget to delete it, and have a sentence like, “She turned off the light and shut the door.%”

So I may be the last person on the planet to discover Shift F5, but I’ll relate this news just in case you also live in a cave. Hold down these two little keys when you first open your Word document, and you will be magically spirited to the exact spot you were working on when you left off. No hidden symbols! No searching for your last entry (and invariably getting caught up reading old stuff when you should be WRITING).

Shift F5 has made this book just a little bit easier for me to work on. And it’s got me to thinking about all the things–large and small–that we struggle against as we try to squeeze in some kind of writing every day. To be able to effortlessly skim past what’s been done before and start fresh where we left off is not only convenient, it’s kinda’ breathtaking.

Because, Jay Gatsby aside, it really may not be such a hot idea to relive the past, getting lost along the way. 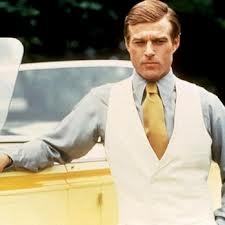 Better to look ahead to the next great thing. That won’t happen if you can’t get past your beginning pages.

So I’m going to do my 20 minutes (or more!) now. And see if I can Shift F5 my way to accomplishing something.

What keeps your writing moving forward?

(P.S. So psyched to have a shot of Robert Redford in a post! Didn’t see that one coming.)