Hannah Barnaby is author of Wonder Show, a novel set in 1939 that  tells the tale of 13-year-old Portia Remini, who flees a Home for Wayward Girls and winds up with a traveling sideshow. As if the freakish world of the carnival and its sideshow “misfits” aren’t enough to deal with, Portia’s also searching for the father who abandoned her, and keeping a constant watch for Mister, her old headmaster, whom she’s certain will someday find her.

Wonder Show was a 2013 William C. Morris YA Debut Award Finalist and a Children’s Book of the Month Club pick. It was also named to the YALSA Best Fiction for Young Adults List, the Bank Street College’s Best Books List, and the School Library Journal’s Best Books List, and it was an IndieBound New Voices Selection. 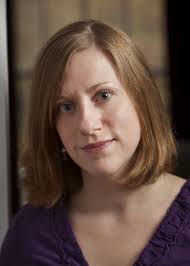 Intrigued? Offer up a comment to Hannah’s interview with Write Despite, below, and you could win a free, signed copy of Wonder Show.

This is your first book, correct? Why did you choose to write YA and is it the genre you plan to continue with?

Wonder Show is my first published novel, but not the first that I wrote. I have a middle-grade story that I wrote during my MFA program at Vermont College, that novel-in-the-drawer that most writers have. I’m not sure if it will ever be resurrected, but it taught me about the building blocks of a novel and about my own process.

As for choosing to write YA, I actually work pretty hard not to think about genre while I’m writing. Some genres—picture books, for instance—are obvious designations and have their own rules, but the lines between others—like middle-grade and YA—are not as clear. When Wonder Show was first published, it was named to the middle-grade summer reading list for the Children’s Book of the Month Club. Then it was nominated for the William C. Morris Award for debut young adult novels. So there was no hard and fast label for the book, which I appreciated because it reflected the fact that the audience for Wonder Show could be wider than one group of readers.

Your website says you came up with the character of Portia Remini in a dream, but what drew you to write about the circus, and its sideshow “misfits” in particular?

When I set out to write Wonder Show, all I had was the image of a girl riding a bicycle on a dirt road, and the sense that she was running away from somewhere. I didn’t know where she was going or who she was running from or anything else, really. Then a friend told me about a grant offered by the Boston Public Library, the winner of which would get financial support as well as being named the Children’s Writer-in-Residence. I decided to apply, and in researching the library’s Special Collections, I found that they had an archive of circus materials and quite a few books on circus and carnival history. A few months later, I won the grant! And then I was faced with actually writing the project that I’d proposed, which became Wonder Show.

The shifting POV among your characters comes later in the book, and gives it an unexpected twist. Was it fun to switch gears this way, and what made you decide to use this technique?

I wrote the first draft of Wonder Show very much by instinct. When I sat down to write each day, I took a few minutes to think about Portia and where she was and who she was with, and then I started to fashion a scene that built that atmosphere. It wasn’t plot-driven writing at all, but it was very much character-driven, and so I needed to get to know the supporting cast better. Writing pieces of narrative from each different point-of-view gave each character a turn to speak to me and let me know who they were and how their stories intersected with Portia’s. I wasn’t sure about keeping these pieces in the final manuscript, but I came to love them and what they revealed about the sideshow family. (I will say, however, that writing without regard for plot or chronology made the revision process *extremely* challenging. I don’t recommend this method.)

Can you talk a bit about your road to publication?

My path to publication is very different than that of most other writers, because prior to becoming a writer I worked as a children’s book editor at Houghton Mifflin, and winning the grant from the BPL also put me in contact with some valuable allies. One of the judges who awarded me the grant was Melanie Kroupa, who then had her own imprint at FSG. A couple of years after I finished my residency, Melanie wrote to ask, “What ever happened with your novel? Can I read it?” I asked for some time to do a quick revision (six weeks!) and I sent it off. Melanie didn’t end up acquiring the project, but her request got me working on the manuscript again and eventually Kate O’Sullivan, a friend and former colleague at Houghton, offered me a contract.

Do you write every day?

I aspire to write every day, but I rarely do. The reality is that I have three kids, only two of them are in school full-time, and life is unpredictable. So most of all, I try to be flexible. I might steal 20 minutes of writing time while my daughter’s in ballet class or while I’m supposed to be folding laundry. When I can plan for larger blocks of writing time, I always plan ahead so I know what to work on as soon as I sit down. I always, always have a notebook and pen with me because you never know when an new idea will come or the solution to a problem will make itself clear. (And my kids are always saying the most hilarious things, so I can capture those, too.)

What advice do you have for other writers still struggling to create or publish?

Writing is HARD WORK. And the fact that it’s hard doesn’t mean you’re doing it wrong—it means that it’s important and complex and full of emotion, as all good writing should be. Take the time to find the process that works for you, and know that your process will adapt and change from project to project. When I started writing Wonder Show, I was a single, working professional living in Boston. By the time I finished the novel for publication, I was married with children and living in the Connecticut suburbs. My perspective had evolved, and it deepened my writing and my understanding of the creative process.

What are you working on now?

I’ve just completed a contemporary YA novel that’s going out for submission soon (wish me luck!). This summer, I plan to work on a younger chapter book and a few picture book manuscripts—I’m giving myself permission to loosen up my schedule and play with writing more than I usually do. I’ll let you know how it goes!

And by the way, if you’re anywhere near Richmond, Virginia, on Wednesday, June 18, 2014,  Hannah will be reading at the Girls of Summer Reading Party at 7 pm at the main branch of the Richmond Public Library,  101 East Franklin Street, Richmond, VA. She will be reading with Meg Medina and also author Gigi Amateau, another ‘Q&A Book Giveaway’ author previously featured on Write Despite. Go if you can!

AND DON’T FORGET: YOU COULD OWN A FREE COPY OF WONDER SHOW. JUST TELL US WHY YOU’D LIKE TO OWN THIS BOOK BY POSTING YOUR COMMENT HERE.

9 thoughts on “Q & A with ‘Wonder Show’ Author, Hannah Barnaby”