Author Art Taylor will publish his first book—On the Road with Del & Louise: A Novel in Stories—on September 15 of this year from Henery Press. His short stories have won many of the mystery world’s major honors, including two Agatha Awards, the Macavity Award, and three consecutive Derringer Awards, in addition to twice making the short-list for the Anthony Award. A native of Richlands, NC, Art now lives in Northern Virginia, where he is a professor of English at George Mason University and writes frequently on crime fiction for The Washington Post, Mystery Scene, and other publications.

Please welcome Art to Write Despite.

How and why did you start writing?

Reading and writing were always directly related for me, even as a child. Books fed both my interest in stories and then my interest in storytelling. I remember telling my first grade teacher sometime before Christmas that I was writing a book and that it would be released sometime after Christmas. I think it was about mice (and wish I still had it now). Needless to say, it’s been a long time until now, when I’m actually (finally!) on the verge of having my first book out. But I think the connection is still the same. I love to read, and I just hope that my writing might give some reader out there the same kinds and ranges of experience that I’ve gotten from books I’ve loved. 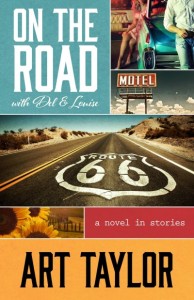 I always go back to Anne Lamott and Bird by Bird and that chapter on “Shitty First Drafts.” When the internal editor starts nagging at me that what I’m writing is terrible (and often it is), I have to remind myself that most writers go through that stage and that it’ll all get better (hopefully!) with revision. And when the journey ahead seems daunting, I have to tell myself that I’ll only finish it one step at a time.

That’s such a tough question—only three? I like different writers for different things, of course. Mario Vargas Llosa has always been a favorite (since long before he won the Nobel Prize, I should add), particularly because of the texture of his prose and his attention to structuring narrative, intertwining stories, and juxtaposing points of view (among other things). I’d say I admire Ian McEwan as well, for many of the same reasons. In my own genre, I don’t know a writer stronger than Tana French. What’s interesting about all that is that I’m a short story writer, and each of these writers are novelists often working on much, much bigger canvases: complex, intricate story lines.

What was your first published piece?

Back in elementary school, I had a poem published called “If I Were An Ace”—third grade? fourth? I probably have it stuffed away in a box somewhere, but more than the poem itself, I remember sitting on the couch in my parents’ house late at night (late for me) and writing, writing, writing it and just being so thrilled at the way it was coming together. I couldn’t have been prouder—and wish now that the act of creating was always so much fun, so driven.

Could you talk about not having an agent, and how that’s affected, or not affected, your being published?

In today’s swiftly, swiftly shifting publishing landscape, I don’t think that having an agent is as necessary a step in the process as it may have once been. I don’t have an agent now, though I did try that route with a previous manuscript and earned some interest but never an actual rep. With the growth of small presses who are willing to take a chance with unagented authors and with programs like #pitmad on Twitter (where you pitch your manuscript to agents and publishers both) and with the rise of different publishing models, including various degrees of self-publishing… well, it’s a new world, as I said. I was very lucky in my own case for two reasons. First, my success in the short story market helped to give me some visibility for both publishers and agents; at Malice Domestic two years ago, when I won my first Agatha Award, I had agents hand me their cards and then had Henery Press approach me even more directly about when I was submitting a manuscript to them; the latter was an invitation I couldn’t refuse. Second, and related, I’ve been fortunate to develop a lot of strong relationships in the mystery community, with other writers, with editors, and with publishers—and being part of the fabric of all that does, I think, expose you to possibilities. By that last, I’m not saying that it’s all about networking or about who you know—that’s hardly the case at all. But being an active part of the literary community can go hand in hand with honing your craft, doing your best work. Marketing yourself without developing your craft—that’s a poor move. But toiling on your craft and not being attuned somehow to the community and the marketplace…that might prove a poor move as well.

Advice for those now on the road to publication?

The previous response probably includes some implicit advice, but I want to focus back more explicitly on craft issues here.

First bit of advice: Whether you write every day or not, touch base with your writing somehow every day. In the past, I’ve tried various ways to keep on a writing schedule: writing for a certain amount of time every day, for example, and at the same times each day, or maybe writing for a certain number of words each day. While I know those systems work for others, they have ultimately seemed artificial for me—and really it became increasingly tough to adhere to any sort of set schedule or word count in the midst of juggling work and parenting and household chores and errands and… and in the end, I more regularly felt guilt about falling short of my goals than elation about meeting them. I won’t say I’ve lowered my standards but instead that I’ve readjusted my sense of pacing. If I sketch out a full scene or revise a scene, that’s great. If I make notes about what to do next, that’s great. If an idea pops into my head for a plot complication or a way to amplify a character, and if that’s the only thing I jot down in my notebook for the day, then that’s great too—because it’s keeping my mind going on the project, and a lot can happen when your mind is working, working, working on ideas, even if you’re not pushing up the word count on the page, even if you’re not at the computer at all. Maybe all of that goes back to the bird by bird advice above. Some days have more birds than others.

Second bit of advice: Ignore what I just wrote—if some other approach works better for you. The worst advice I’ve ever gotten is that we writers have to do certain things in certain ways to be a success. Each writer has his or her own approach; success can be reached through many different paths. Just check out the chart here.

What are you working on now? If you’re taking a break, what are you reading now?

Right now, I’m drafting the second of three intertwined novellas that may become my second book. Beyond that, I don’t want to say too much more—else I jinx the small progress I’ve made on it so far!

As for reading, I’m at various points in several books: Charlotte Armstrong’s Night Call and Other Stories of Suspense, Patricia Highsmith’s The Boy Who Followed Ripley, and Rules of Thumb: 73 Authors Reveal Their Fiction Writing Fixations. Beyond that, I’m always browsing stories in several anthologies that I have at home and in the office, including the most recent several that I picked up at the latest Malice Domestic convention—Fish or Cut Bait from the Guppy Chapter of Sisters in Crime, Murder on Wheels: 11 Tales of Crime on the Move from the Austin Mystery Writers, and two volumes of The Whole She-Bang from Sisters in Crime Canada—and the Black Lizard Big Book of Locked-Room Mysteries, which has become a regular bedside companion.

You can pre-order your copy of Art Taylor’s On the Road with Del & Louise here.

6 thoughts on “Q & A with Writer Art Taylor”